After spending the summer in Thessaloniki to distribute previously collected donations for food and hygiene packages, I wanted to provide humanitarian aid for refugees back in Germany during the semester. From there on the idea developed to organize a donation transport to Calais. 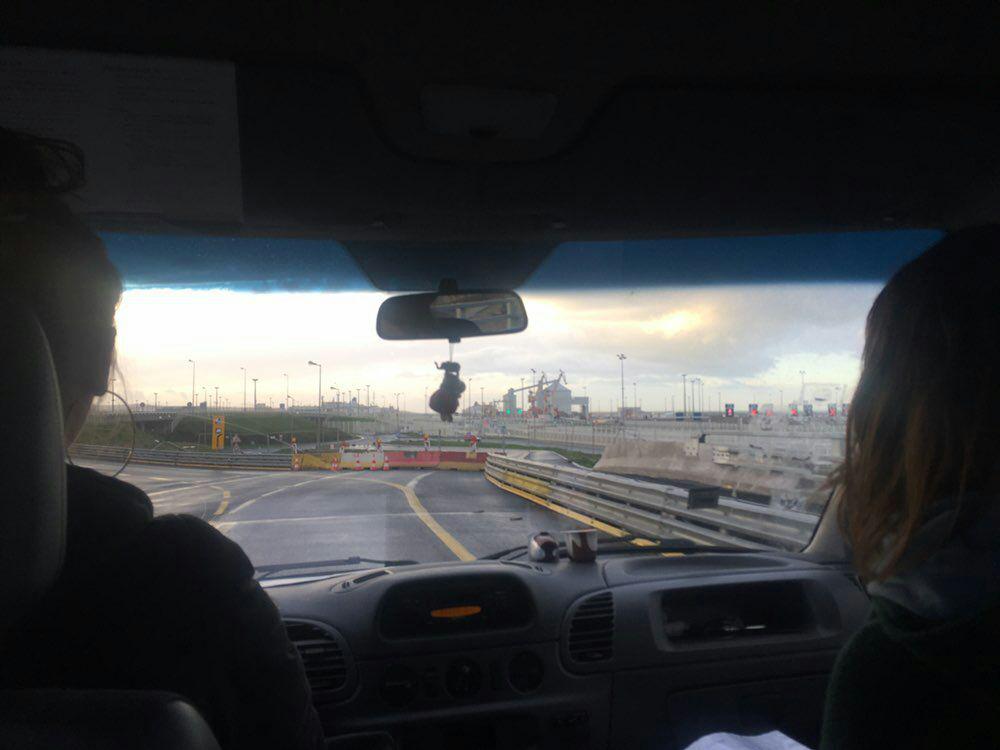 There are currently about 1.000 to 1.200 fugitives in the Calais-Dunkirchen region. There are not enough sleeping places for these people, especially since many accommodations only open at sub-zero temperatures, which means that people still have to sleep outside at night temperatures between 1 and 2 degrees. Furthermore, almost every day the French riot police evacuate people’s belongings and expel them from their sleeping places, for example under motorway bridges, often using tear gas and other physical violence. Many people try to get to Britain in the holds of ships and lorries. There are a number of reasons for this, for example, many already have families or speak English, others have had negative decisions about asylum applications in one country before and are still looking for a safe place. However, together with the French Government, England is systematically closing itself off. In January 2018, the British Government allocated 50 million euros to France for the rejection of refugees. Macron, on the other hand, is under strong domestic political pressure to “get the situation in Calais under control”. This policy is being carried out on the backs of people seeking protection, who are not being treated humanely in Calais.1 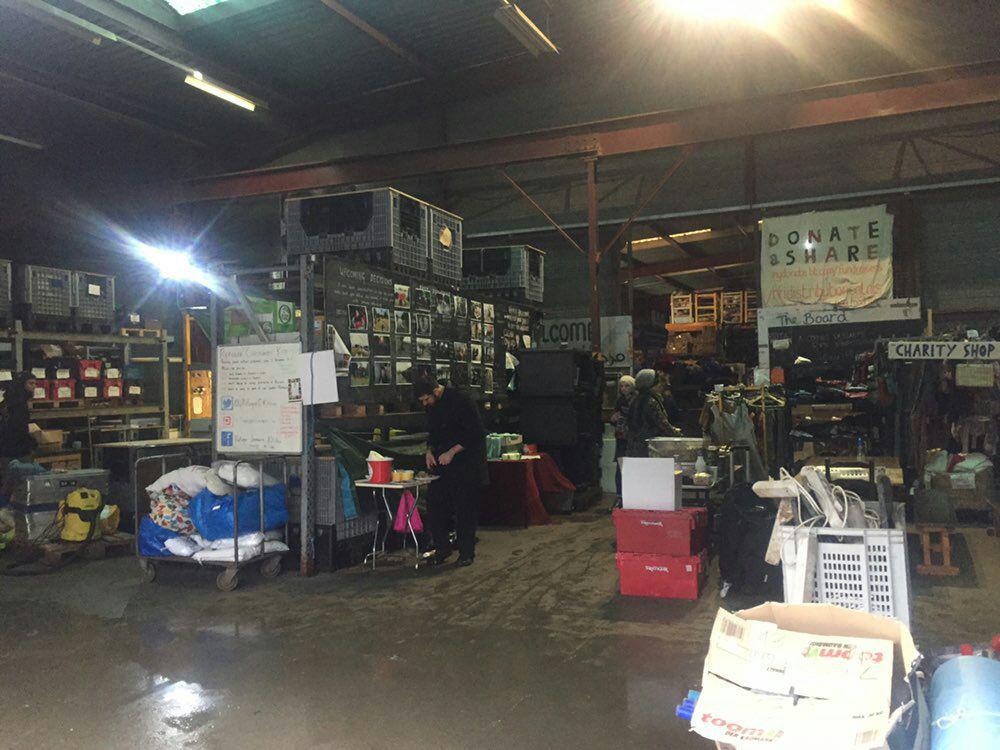 In Calais there are several organisations (helprefugees, Care4Calais, etc.) that have been providing voluntary help for years and are therefore dependent on donations in kind and money. On their websites they indicate exactly what they urgently need and what they cannot accept. I started the project on my own, asked for donations in kind on ebay’s classified section, various Facebook and Telegram groups and spread the word among my friends. The donations gradually trickled in, the basement filled up and I spent many mornings and afternoons collecting, accepting and looking through donations.

I was very happy when Rigardu e.V. offered to help me with the transport and made their Sprinter available to me (because the donations didn’t fit into the previously organized T3 anymore) as well as to offer another collection place (because the cellar was now full to the brim and only with luck and good persuasion had I been able to prevent the caretaker from throwing away the tents stored in the cellar corridor). We organized together a kitchen for everyone (food for a small donation) in the Atari (a shop project in Leipzig), where extra money for hygiene articles and further masses of donations in kind came together, and we released a large enthusiasm for our homemade flat bread. During this time, I met so many great people, who supported me, who tampered with their neighbours and colleagues, who also donated – even outside the student bubble, where I usually stay. But I’ve also received many derogatory to menacing comments and messages forcing me to justify why I don’t collect for German homeless people and that I certainly only want to have the stuff for myself (yes, I certainly have a soft spot for men’s pants in XL and baby ski suits, of course). 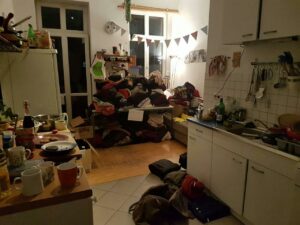 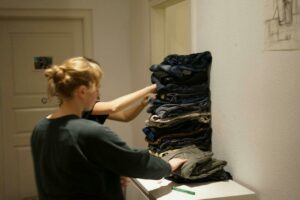 At the beginning of December, it was time – all the clothes, shoes and outdoor utensils had to be sorted and packed. Our apartment was turned into a packing station for one day, up to 15 people helped at the same time (motivated by as many bottles of mulled wine) and in the end about 50 moving boxes and 20 garbage bags were ready for the departure to Calais. From the over 600 Euro donations I could buy toothbrushes, toothpaste, disinfection gel as well as baby wet wipes and student food (quote from the postman who brought the huge Rossmann package: “You probably attach a lot of importance to cleanliness, don’t you?” This departure was also more or less problem-free (Low point: How on earth should we stack the boxes up to the ceiling without them falling on our heads later; High point: Good that we store so much bulky waste in the cellar like the plates of an old bed, which can prevent exactly that when properly installed?) 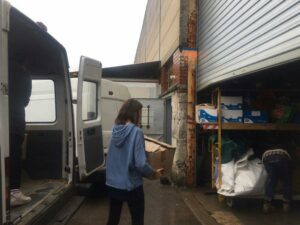 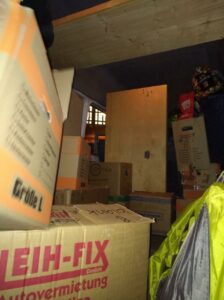 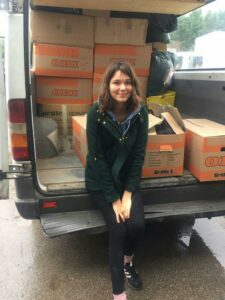 At night we started with two friends who mastered the long way and brought us to the gates of the first warehouse, which belongs to the organizations helprefugees and womenrefugeescentre. Nice and sad at the same time that within 15 minutes all the boxes packed for them were unloaded from the Sprinter and disappeared inside the huge camp. One hour later, the remaining donations were also delivered to the Care4Calais warehouse. As in the case of a committed inhabitant of Calais, who offers private volunteers an overnight stay despite hostilities from neighbours*, she found a place to sleep. The atmosphere in Calais seemed tense, we saw a lot of police and some groups of refugees, who were out in the night with constant rain and frost.

The next morning, we went straight back, with an empty sprinter and a big relief to have managed everything. Many thanks to all the strangers, new and old acquaintances, my friends and my family who donated, collected and supported me.

1Background information is taken from this report 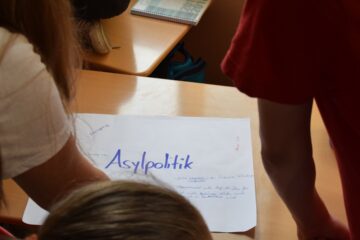 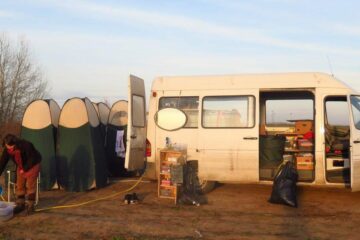